Back in 2018, we wrote an article called More Levidromes words. Our new article could almost be an addendum to that article.

Over the years, we have put together some pretty good lists of levidromes - in many different languages. We started with English, then branched off to any language where we were able to get a decent list of words.

But that is the blessing, as well as a curse. Finding lists was initially easy. The system which runs this website has an Ubuntu Linux operating system. As part of Ubuntu, it maintains a list of words in multiple languages if one chooses to install them. These lists are used for, among other things, to determine if users' passwords are strong enough for certain applications (after all, no one should be using a password which is in a dictionary file, should they?).

So levidrome lists were built from predefined dictionary word lists.

But not all words are in these word lists or dictionaries. Sound familiar?

Case in point. Adanac. This is a levidrome for Canada. Canada appears in our english word lists, but Adanac doesn't. As such, it isn't in our levidrome lists.

However, try googling adanac. You will find many references.

These are just a few of the references to adanac.

But with all these references, it is still not in a dictionary word list, so not in our official lists.

As stated in the previous article, William Shatner found the word Serutan...which is Natures in reverse. Also a levidrome pair excluded from our levidrome lists.

There must be hundreds if not thousands of other made up words which have levidromic pairs.

We too have made up a levidromic word - Emag - which is game in reverse. It is the latest levidrome game added to our collection. In fact, if you google Emag, there is a website for machine tools at https://www.emag.com as well.

Ironic. Made up words all over the internet. Some which are actual brick and mortar locations. Established. Sounds like a goal. Sounds like something we should be doing.

Well, that is our goal too. We are trying. As always, #levidrome

Three years ago today, Oxford Dictionaries responded to a tweet from William Shatner about the word Levidrome in a YouTube video labelled Oxford Dictionaries: Levidrome. You may have seen the video, but some people enjoy reading instead. As of writing of this article the video has been viewed almost 10,000 times.

Below we have put together a transcript from that video. Happy reading. 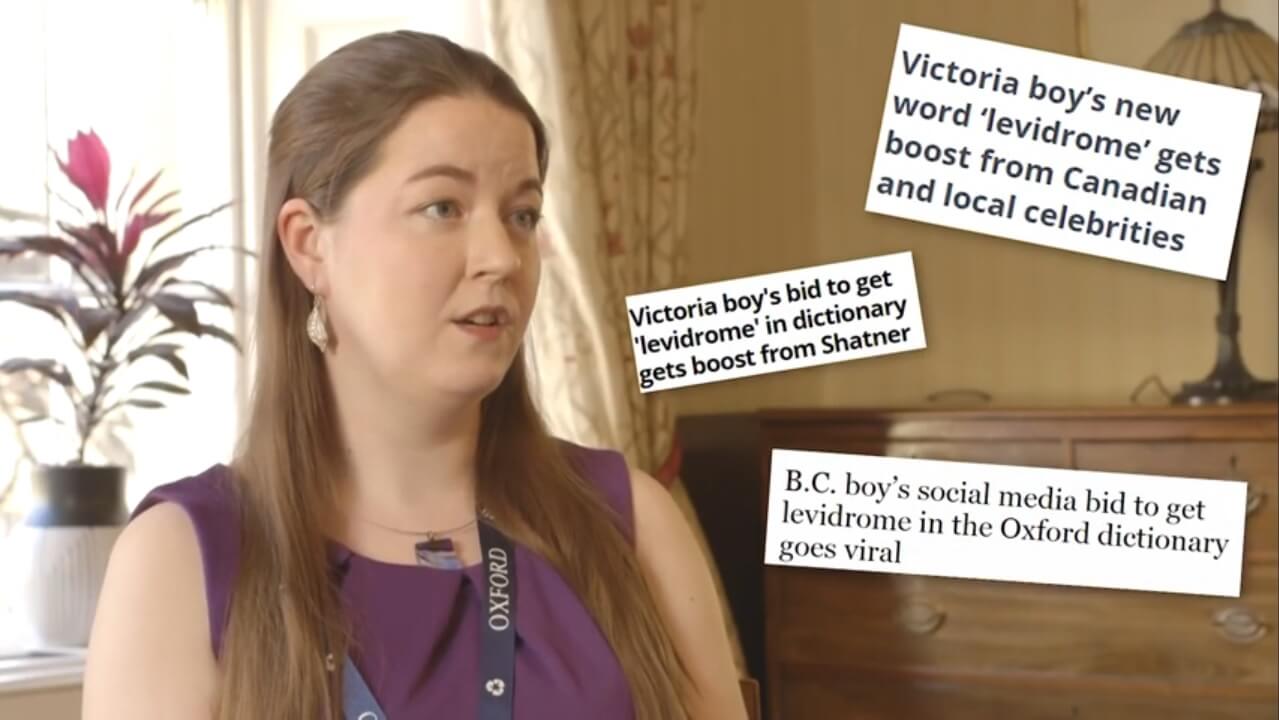 Hi There.
I am Rebecca and I am an editor for Oxford Dictionaries.
Two weeks ago, William Shatner tweeted us to let us know about a new word.
This word was "Levidrome" meaning a word that becomes a different valid word when read backwards, for example "stop" and "pots" or "god" and "dog".
It was created by six year old Levi Budd in Canada.
Since then, media outlets have picked up on it and have covered the levidrome campaign.
So, Levi, there are many new words every year, some very clever ones, and some very useful one. We don't add all of these words to our dictionary - we'd never sleep if we did!
Instead, we only add the words that get used by a lot of people for a long time.
Lots of people know your word, and they know what it means, which means "levidrome" is well on its way into our dictionary.
After just five weeks, that's really impressive.
The next thing we need to see is people using the word levidrome not just part of your campaign, but whenever they are talking about a word that becomes another word when you read it backwards, and some people are saying that they have started doing this!
Then all we do is wait, and hope that people keep using your word.
We have a list of all the words we want to keep an eye on, and levidrome is on that list. In a year or so, if lots of people are still using your word, it might well get into our dictionary.
Thanks for watching.

Ironically, if you throw the transcript into our levidrome finder, there were 44 levidromes in their verbiage (using the non-insane english list), include 4 levidromic pairs (which were cited in their examples).

Levidromes should be in the news again today? Today marks the 3rd birthday for the initial Levidrome video posted by Levi and his father.

We are also attempting to assist with getting the word recognized by periodically checking the internet for new activities then posting those activities within our news section.

Although the video was posted on October 9, 2017 it didn't start getting traction until November of 2017. That was when News outlets began picking up the story. Not bad. From video to News is less than one month.

When it hit the News, that was when we heard about it, and shortly afterwards, levidromelist.com came into being.

We were intrigued with the story and very curious of the outcome. We started to help spread the word by creating our various lists. The goal was to assist with global recognition by showing the world that levidromes existed not only in English but all languages.

Our goal was achieved. Lists in different languages.

But we didn't stop there. Games. News. Tools. Recognition.

Recognition? There are many hits of levidrome on the internet. If one searches for levidrome in your favorite search engine, you will surely find us. But will it be enough? We need the recognition of the dictionaries. The true end-goal for levidrome. Three years seems like a long time. In some respects, it is. But in the overall scheme of things, it can be looked upon as foundation building. Establishing a foundation which will stand for all time does take time. 3 years, and now counting. A foundation of usage.

Levi and his father ran the first mile with their video. The torch is now passed on to all of us to continue this race to recognition. Hang in there levidrome. We will cross that finish line. We got this.

As a computer geek, I dabble a bit in different programming languages and development kits. I started to play with Unity to see how hard it would be to develop an online 3D game.

We have previously developed a word match game (easy and hard), and figured we could spice it up a bit. 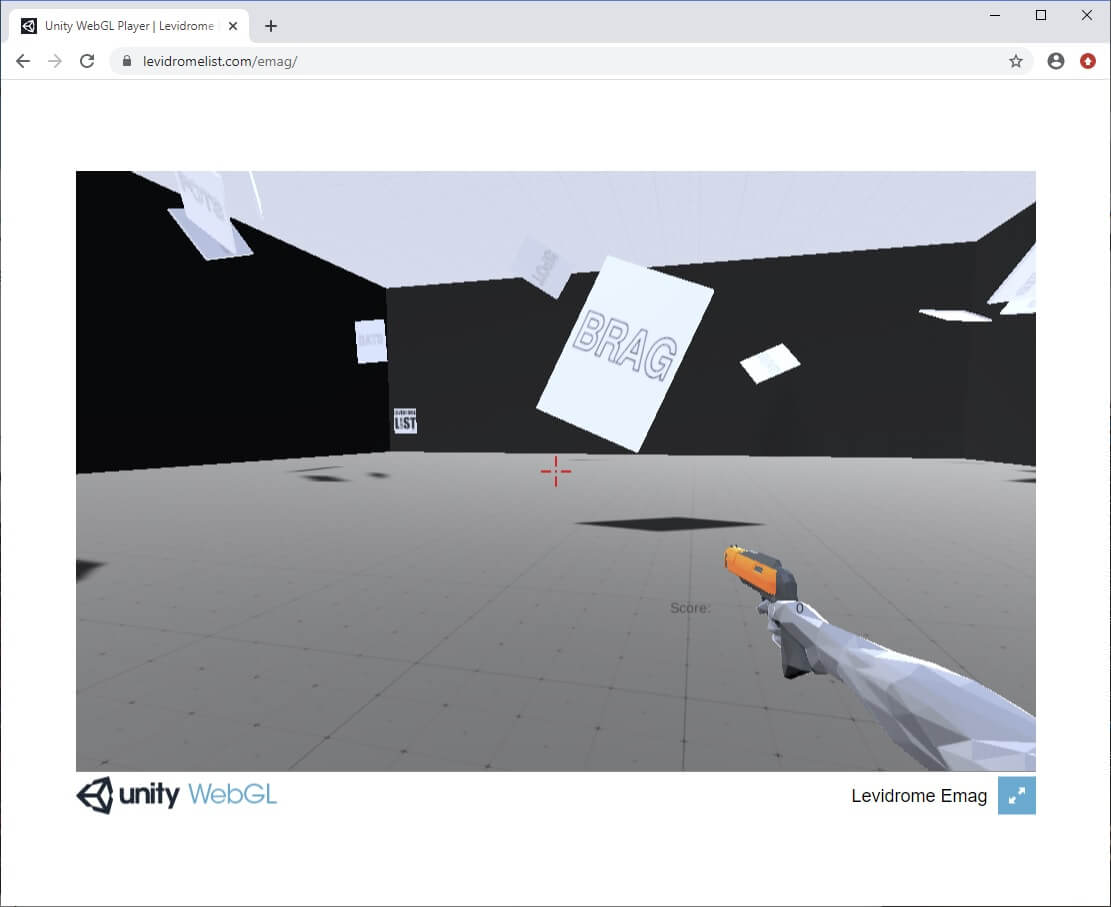 So here is a sneak peek at Emag, which is a levidrome for the word Game (clever, huh?). You walk around the arena using the classic W, A, S, D keys, jumping with the spacebar, and shooting with the mouse. The goal is to match the levidromes. Once matched, they collide into each other and disappear. You continue until there are no more tiles in the arena.

It is still in Beta, so there may be glitches...and it is definitely unfinished. It does not play very well on mobile devices so for now it is recommended you play the game on a PC. Depending on interest, we will develop it further, so for now, have fun.

If you have any suggestions or comments, please contact us.

So, without further ado, here is Emag. Enjoy.

Tagalog. Before today, I have never even heard of it. But, this language is spoken by more than 22 Million people. Filipino is an updated version of Tagalog.

We have included both the levidromes and the palindromes from this language.

If there is a language you would like to see added, let us know. It is easy to create the lists...It is just more difficult getting decent dictionary file of words.

With Tagalog being added, it brings the list of levidromes up to over 31000 pairs.

Hats off to youtuber Pinay sa Canada for creating her "Palindromes and Emordnilps (Anadromes and Levidromes)" video. In her video, she provides examples of palindromic sentences as well as levidromic partners.

Way to go Pinay! Thanks for spreading the word. Great Video!

Note: We found out about the video on May 5th, but posted it with April 28th in our News section to keep in line with the chronology of levidromes.

What's this? Do I see palindromes as a main heading...on a levidrome site?

Well, yes you do. When we started this site, we wanted to assist Levi and his parents get the word out about levidromes. We focussed only on levidromes. Palindromes were mentioned, but only in respect to the Levi story and definitions on the main page of our site. No other site had levidromes, but others had palindromes.

Palindromes played a huge roll in the creation of the word "levidrome". If it wasn't for palindromes, who knows what a levidrome would have been called.

So to salute the palindrome, we decided to give it an equal footing on our website by providing it the same dips into our dictionary files. After all, the tools we used to generate the levidromes also produced palindromes, so we already had the lists. So we have levidrome lists as well as palindrome lists from all the same language sources.

We just now need the dictionaries to accept the word too. 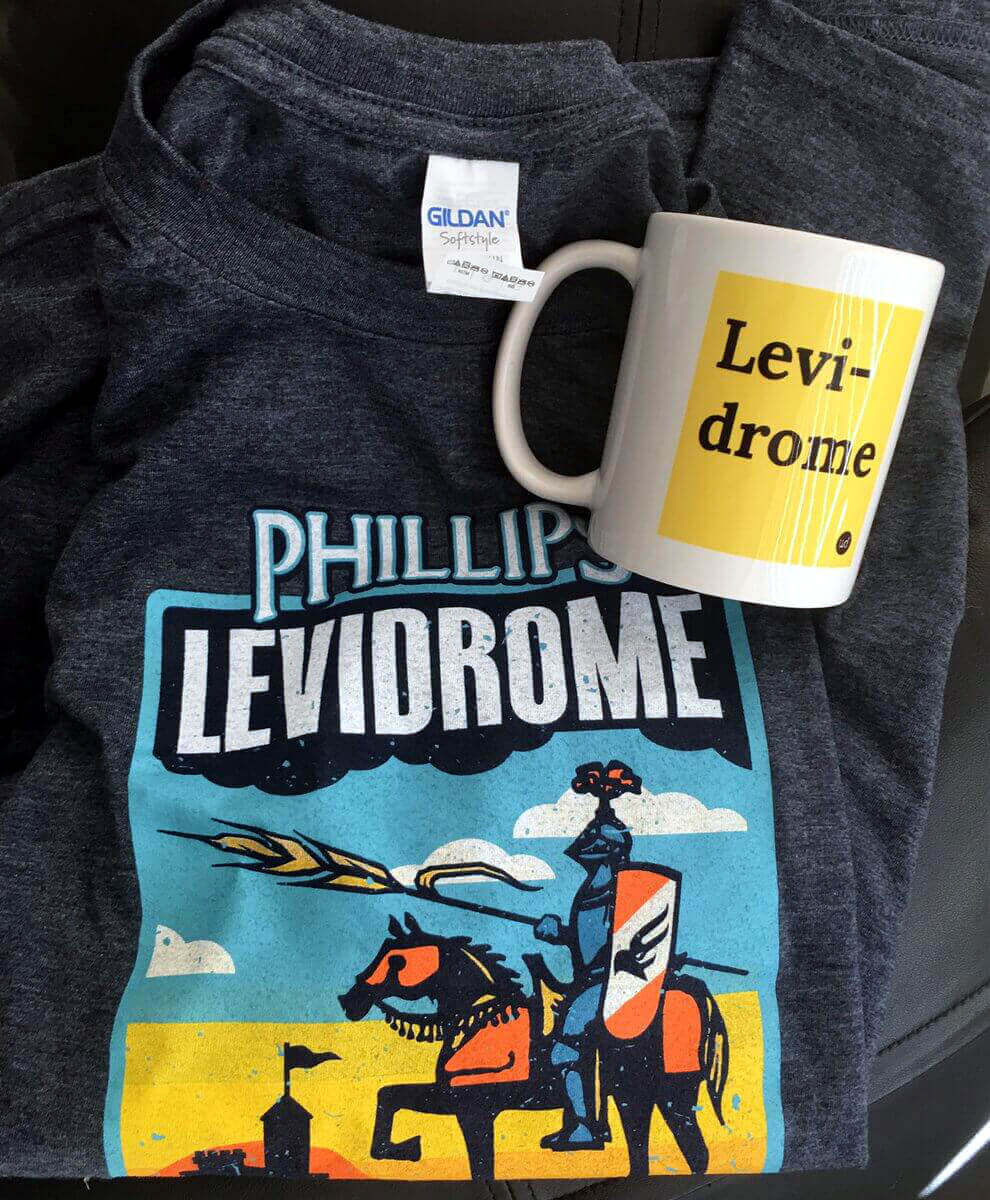 The physical levidrome. What does that even mean?

Well, a lot of what you see on our website is virtual. The articles. The images. Our levidrome memory game. All these things exist in cyber-space. On the "intertubes".

It is when something moves from a virtual presence to a physical space, that is when people need to start paying more attention.

Some words will never cross the border into the physical realm.

But that is hard for a word like levidrome. It is a word. An idea.

Or is it hard?

This transformation has already happened into the physical world.

It happened years ago when children came up with levidromes in classrooms and wrote them on pieces of paper and taped them to boards. The word levidrome became physical.

It happened years ago as well when a brewing company printed their first label and placed it on their newly brewed beer. The label is physical. The beer is also physical (thank goodness). You can actually taste a levidrome (legal age of drinking disclaimer needs to be inserted here).

It happened when the NY Times published an article about levidromes. On physical news print.

As you can see in the image here, the cup is physical. The shirt is physical (although technically, to me, they both are still virtual because it is a digital photograph) but you get my point. They are physical to someone, possibly even swag belonging to William Shatner.

The final step for this transcension from virtual to physical involves the dictionary publishers. Once they publish their new dictionaries with the word levidrome between their covers, the journey is complete. It is the ultimate goal for any new proposed word - to appear physically on the pages of a dictionary.

I am looking forward to publishing the article, "The Journey is Complete".

But alas, the journey continues.

Now remove some dashes or slashes and place a space, we end up with

Notice something. They are levidromes!

By definition, a Levidrome is "word with a different definition when the spelling is reversed". If one looks at 2020, it is definitely a different number than 0202. It follows the definition perfectly.

On a side note, I suppose I could have written the date as 02022020 or 20200202 without the space in the middle. But then I would have created a couple of numeric palindromes, and this website is all about levidromes. The difference between creating a palindrome or a levidrome in this particular case is a conveniently placed "space". And that's how it is done. So February 2, 2020 is a levidromic date. ;)

As always, spread the word, and the word is levidrome!