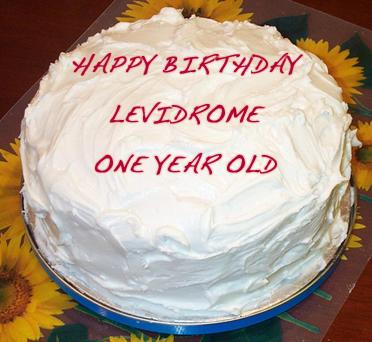 Happy Birthday levidrome! We consider your birth date October 9th, 2017 when your YouTube video appeared on the internet. You are one year old today. You started out as a word in Levi's vocabulary. And today, one year later, you have made quite the impression.

Shortly after your birth, you started to become popular.

CTV publishes a story about you. You make an appearance in the Wiktionary. You became a challenge project in various schools. You appear in an Oxford Dictionary blog for a second time. A number of beers are named after you. You get William Shatner's thumbs up tweet for the beer name. You inspired a new game, Cryptic Clue. Another website and hangman game is created because of you. You hit the Sunday edition of the NY Times. A randomly generated wordsearch puzzle is created because of you. You make an appearance in the NY Times a second time. You appear in the Urban Dictionary a second time. A wordcloud is inspired by you. An Operations: Levidrome on reddit's photoshopbattles was launched in honour of you. There are a lot of fun facts about you.

Like we said, you made quite the impression. You can find more details for these stories in our News section..